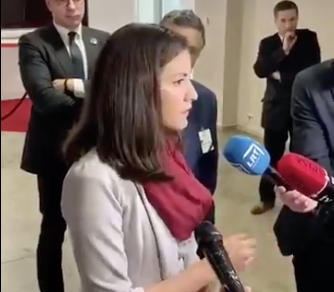 Cuban activists in Vilnius are calling for Lithuania to block the EU-Cuba pact signed in 2016. Only Lithuania is yet to ratify the deal.

“Lithuanians are at the crossroads. You have the opportunity to give the same chance that Iceland provided you 30 years ago. You can give Cuba a chance of freedom,” Acha said.

The parliamentary foreign affairs committee backed the ratification earlier this month, and the parliament is scheduled to vote on it during its upcoming spring session.

Foreign Minister Linas Linkevičius previously said EU dialogue with Cuba is aimed at weakening China and Russia’s influence in the region, and it also provided an opportunity to include the rights of political prisoners into the agenda.

“If ratified, the agreement will pave the way for EU money to support the dictatorship. That’s also been recognised by two EP resolution, but that still doesn’t work, as Europeans still want to do business with the devil,” said Ažubalis.

Those in favour of cooperation with Cuba say Havana’s further isolation will not encourage the country to improve the human rights situation, which can be addressed by a common EU position via trade and political dialogue.

Meanwhile, human rights activist Rosa Maria Paya said the agreement between the EU and the “Cuban Communist dictatorship […] excludes the Cuban people [and] the independent civil society which struggles to survive”.

“The Cuban regime offers investments privileges to a very small bunch of European entrepreneurs who are willing to exchange values for dirty money,” she told reporters at the Lithuanian parliament. “It is the dictatorship that needs the money ant the legitimacy from having an agreement with the EU.”

“We are asking the people and parliamentarians in Lithuania, who know the misfortunes of Communism and the importance of international solidarity, to take sides with the Cuban people and not to ratify this agreement that is beneficial for the Cuban dictatorship,” she added.