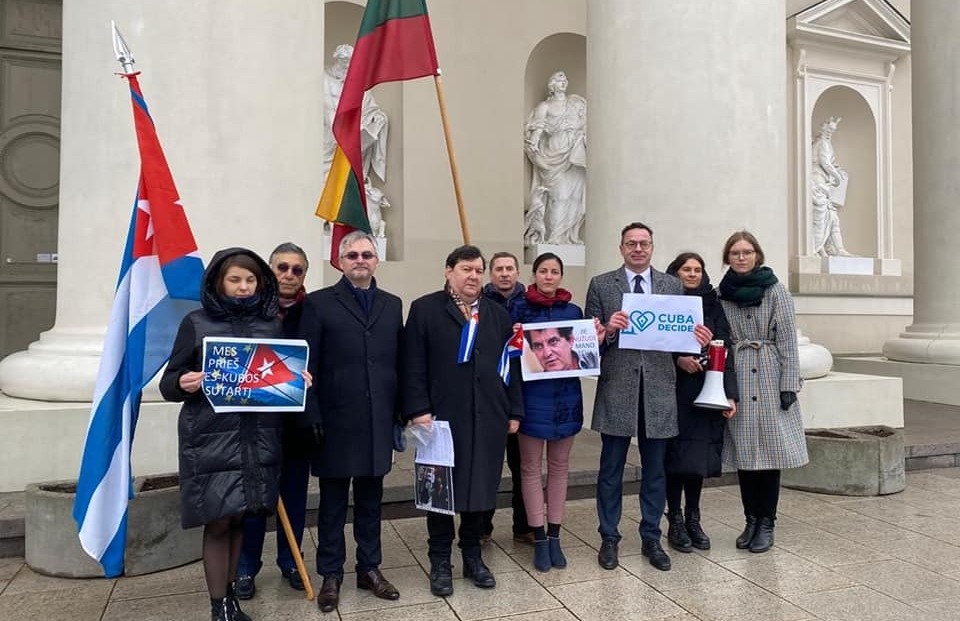 In January, promoters from Cuba Decide launched a successful social media campaign called “100 days, 100 voices” with the aim of raising awareness and demanding the release of José Daniel Ferrer and the activists jailed with him.

A monumental victory has been the successful completion of forcing the regime to release José Daniel Ferrer, Roilan Zárraga Ferrer, José Pupo Chaveco and Fernando González Vailant. On Friday April 3, Ferrer arrived at his home in Santiago de Cuba. The regime imposed a house arrest sentence that he had rejected and refused to sign.

Ferrer and the three arrested activists were tried on February 26. Since March 12, the People’s Provincial Court of Santiago de Cuba had to issue the sentence against the four activists of the Patriotic Union of Cuba (UNPACU), arrested since 1 October 2019.

From the Cuba Decide platform, we have been working to alert the international community about the detrimental influence of the Cuban communist regime and its consequences in recent months, as well as to encourage action by the governments allied with democracy, in defense of their own sovereignty and in support of the Cuban people.

Throughout this past quarter, Rosa María Payá, and a delegation of promoters from Cuba Decide, held successful meetings with the constitutional government of Bolivia and its president Jeanine Añez, the government of Uruguay and its President Luis Alberto Lacalle Pou, and the Government of Paraguay and its Vice President Hugo Velázquez.

The meetings focused on the need to take action in support of the democratic change demanded by the Cuban people, as was later shown by the governments of Uruguay and Bolivia. The meetings also served to expose the interference of the Cuban dictatorship’s intelligence services and their attempts at destabilizing democracy in the region.

In the following days, the Bolivian government decided to sovereignly suspend its diplomatic relations with the Cuban dictatorship, given the constant hostility of the island’s authorities and the insults of the Cuban Ministry of Foreign Relations during Payá’s visit to Bolivia. Further, the President of Uruguay left the leaders of the Cuban regime Miguel Díaz-Canel and Raúl Castro out of his inauguration. These achievements were obtained thanks to the efforts made by Cuba Decide.

In February, Rosa María Payá and a group of promoters from Cuba Decide participated in a conference in the Parliament of the European Union to advocate for the defense of a resolution between Cuba and the EU based on the principles of democracy and human rights that Cuba has violated in many respects.  She also paid a visit to the capitals of Lithuania and Belgium to ensure the suspension of the Political Dialogue and Cooperation Agreement (PDCA), which, as Rosa Maria Payá denounces: “does not condition cooperation or trade with the regime in the respect for human rights or democracy.”

Further, Cuba Decide managed to postpone the vote of ratification for the Agreement in Lithuania after a visit in which, together with the Foundation for Human Rights in Cuba, we were able to meet with congressmen, government representatives and the press to stop the PDCA in that country.

In March, promoters of Cuba Decide who are residents in Europe held a successful demonstration in Madrid, with the support of local citizens and politicians, to ask the congress for their support of the Cuban people’s right to decide.

In December, Cuba Decide began the year with the video: “Cuba Libre Para Decide.” The video highlights the reasons Cubans have a deep desire to work for change on the island, their dreams and their aspirations. It has been viewed more than 50,000 times across social media platforms. We invite you to watch it and share the link with others.