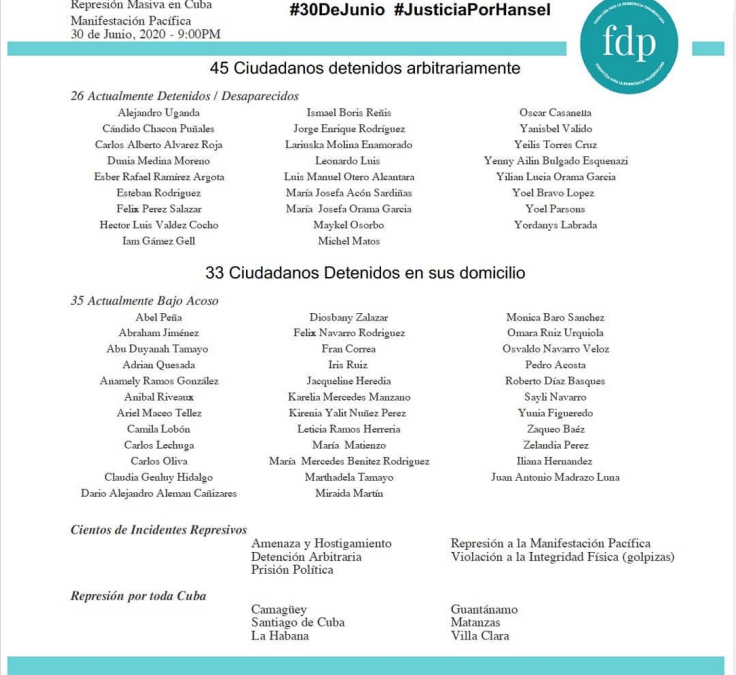 On Tuesday, June 30, 2020, more than two hundred citizens in several provinces were arbitrarily retained or detained in Cuba following orders from State Security. The goal of this new repressive wave was to prevent them from attending a peaceful demonstration called by the independent civil society, in order to demand justice after the murder of Hansel Ernesto Hernández Galiano at the hands of an officer of the National Revolutionary Police (PNR) on June 24, as well as to demand freedom for the political prisoner Silverio Portal Contreras, whose health condition is very delicate.

The places where the main protests should have taken place were the centric Yara Cinema in the Cuban capital, and the Céspedes Park in Santiago de Cuba. Both places were militarily occupied by agents of the Ministry of the Interior (MININT). In turn, the Cuban Telecommunications Company (ETECSA) complicitly kept incommunicado most of the journalists and activists who had spoken about it.

José Daniel Ferrer, the leader of the Patriotic Union of Cuba (UNPACU) and coordinator of the Cuba Decide citizen initiative for a democratizing plebiscite on the Island, tried to reach the street by jumping from his balcony, because the authorities had sealed him with a padlock placed by them at his own door. He was instantly arrested violently, along with his son José Daniel Ferrer Cantillo, who is only 17 years old and was subjected to cruel treatments considered torture.

When Ferrer was released several hours later, the leader of UNPACU and promoter of Cuba Decide declared that June 30, 2020 “was a new exercise for leading others to feel motivated and end up participating in the next convocation. We will continue like this, from one exercise to the next, until many overcome their fear and then we become thousands in the streets fighting for freedom.”