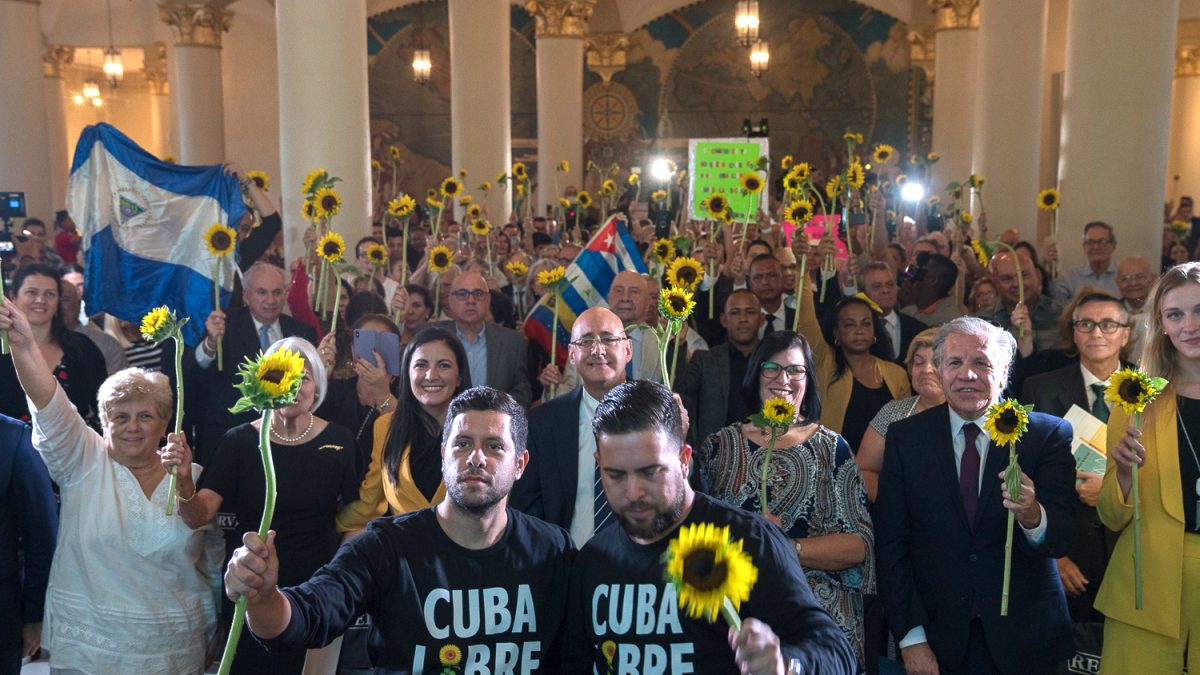 Historic meeting of the opposition and the cuban people, together with hemispheric leaders, reaffirming their unity in action for a democratic change and the end of the communist dictatorship in Cuba.

“We must start with Cuba, the day we liberate Cuba, (…) it will be a fundamental step to eradicate all the dictatorships in the continent,” said Luis Almagro, Secretary General of the OAS.

The call made by the Organization of American States, together with an organizing commission made up of opposition groups, and hosted by Miami Dade College, invited all members of civil society and the Cuban opposition to ratify the Agreement for Democracy in Cuba and to carry out actions for the end of the communist dictatorship on the Island.

The massive meeting, Pasos de Cambio (Path Toward Change) managed to gather more than 600 people in the Freedom Tower of the city of Miami. Among them, a representation of the vast majority of Cuban organizations of resistance, exile and opposition. It was attended by several hemispheric leaders, such as the Secretary General of the OAS, Luis Almagro, the President of Colombia Iván Duque (by video) and the Deputy Assistant Secretary for Cuba and Venezuela in the Bureau of Western Hemisphere Affairs of the US Department of State, Carrie Filipetti.

The event was opened by the duo Los Pichy Boys and the Cuban singer Lena Burke, who sang the national anthems of the United States and Cuba.

Led by Rosa María Payá, from Cuba Decide, the meeting began with a minute of silence, in honor of all the victims of the communist dictatorship in Cuba and recalling the more than 120 political prisoners on the Island. This was followed by a demand to the Cuban regime to provide a proof of life of José Daniel Ferrer, leader of UNPACU who was taken more than 3 weeks ago by state security forces and whose current whereabouts are unknown.

Rosa María Payá also expressed that “this meeting strengthens the unity of purpose of the opposition and the people in favor of democratic changes, it denounces the illegitimacy of the government designated by the Cuban dictatorship, and it makes aware all the participants and the international community of the urgency to stop the dictatorship on the Island, in order to eliminate the main obstacle to peace which the continent is facing.”

Right after the introduction from Miami Dade College president, Dr. Rolando Montoya, former Congressman Lincoln Díaz-Balart, from La Rosa Blanca institute, conducted the Ratification Ceremony of the Agreement for Democracy, a document that expresses the “fundamental principles on which we can all agree, an umbrella under which we all fit,” and he recalled that “each concept and each word was agreed” more than twenty years ago when said Agreement was approved by Cubans on the Island and in exile.Blanca Reyes from The Ladies in White and Silvia Iriondo from MAR for Cuba read the names of the more than 160 organizations that ratified or joined the Agreement for the first time, while the members of the organizing committee, representing all of them, took the stage to sign it.

Díaz-Balart thanked the actions of solidarity that the Cuban people are receiving from the international community, and he quoted José Martí to refer to the courage of those who support the Cuban opposition and civil society, like Luis Almagro: “When there are many men without decorum, there are always others who themselves possess the decorum of many men.”

During her speech, Carrie Filipetti, Deputy Assistant Secretary for Cuba and Venezuela in the Bureau of Western Hemisphere Affairs of the US Department of State, praised the courage of the activists and denounced the abuses against said opposition leaders on the Island. She particularly mentioned José Daniel Ferrer and the three activists who have been missing since October 4 in Cuba, after a violent arrest. She also denounced the authorities of the dictatorship for preventing dozens of members of the opposition from traveling to Miami to attend the meeting (message from activists from the island).

Filipetti stressed that the regime “cannot continue to obtain illegal funds from transactions linked to the US financial system” and that the sanctions “will continue”, that “business opportunities cannot be traded for moral values.” The official announced that the US will ban commercial flights to nine cities in Cuba, a sanction requested by Secretary of State Michael Pompeo to the US Department of Transportation, as a measure that will begin on December 10.

“We, representing the United States, are here just to show our support for Cuban democracy activists,” she said, and then added that this is a “wonderful opportunity” for the Cuban opposition to show that they are united in their struggle for freedom.

The Secretary General of the OAS, Luis Almagro, affirmed that the region has a “debt pending for decades” with the Cuban people, that are still suffering “the worst dictatorship of all”, “parasitic” and “failed”, and he urged to get rid of all dictatorial regimes “starting with Cuba: the day we liberate Cuba, (…) it will be a fundamental step taken to eradicate all the dictatorships in the continent.”

The Secretary General stated that “as long as there is a dictatorship in Cuba, we will have polarization, (…) there will be destabilization on the continent and (…) we will suffer in each of our countries.”

It is “a corrupt and immoral dictatorship, which has taken the rights from its people and intends to take the rights of other peoples,” he insisted.

Luis Almagro praised the Cuban people “because they have managed to pass the torch of freedom from generation to generation” and they deserve to “recover their freedoms”.

Then Rosa María Payá thanked the Civil Society, the Cuban people, the opposition, and all international participants, since “this meeting celebrates what bring us together.”

The event held last Friday October 25, also included the participation of representatives of the governments of Costa Rica and Taiwan, among other international invitees from Venezuela, Nicaragua and Mexico.

To watch the full event, go to our YouTube channel, by clicking HERE